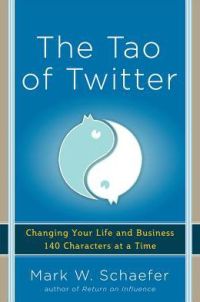 The Tao of Twitter: Changing Your Life and Business 140 Characters at a Time

Twitter is a “non-intuitive communication platform” but Mark Schaefer has figured it out and experienced tangible results. “My four largest customers, five most important collaborators, and my teaching position at Rutgers University all came to me via Twitter connections.”

The mantra of this book is “targeted connections, meaningful content, and authentic helpfulness… At its heart, Twitter is a business networking tool… Think of yourself in a networking situation… Would you stand there and read press releases? No… You would seek out great people to connect with, discuss subjects that are interesting to you and them, and look for ways to work together. Twitter can work exactly the same way… It’s all about P2P—person to person connections.”

The first step in building a network on Twitter is to start following people. “You need both quality engagement and quantity of followers to ultimately be successful.” The author recommends following back everyone who follows you, except for obvious robots and spammers. Then, he sends a mixed message by writing, “Remember that you are trying to build a relevant and targeted community. The more people who follow you, the less real interaction you will have with them, so choose your ‘tweeps’ carefully.” Hmm. On a side note, as of this writing Schaefer has 52,850 followers and he follows 25,194 (presumably chosen carefully).

Chapter Ten suggests numerous ways to use Twitter for business. One example is customer service. “What’s the world’s favorite Twitter activity? Complaining! … Most businesses MUST be listening on Twitter!” He adds, “One of the biggest opportunities of social media is ‘humanizing’ the brand… Businesses should aim at involving their own employees to be ‘brand beacons’ on Twitter instead of relying on an outside agency.”

A variety of applications and websites are available to help manage Twitter activity. Quite a few are mentioned in the book (e.g. Seesmic, TweetDeck, HootSuite, Twubs, Listorious, wefollow, TweetChat, Twitterfall).

Engaging on Twitter does require a time commitment. If management is reluctant, a “useful tactic is the pilot program… Ask your boss if you can test it for six months.”  The author recommends that every organization have a social media policy and he provides a link with hundreds of examples.

As you might have guessed, this book has nothing to do with Taoism.

Schaefer, Mark W. The Tao of Twitter: Changing Your Life and Business 140 Characters at a Time. New York: McGraw-Hill, 2012. Buy from Amazon.com