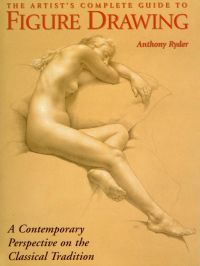 The Artist’s Complete Guide to Figure Drawing: A Contemporary Perspective on the Classical Tradition

Anthony Ryder presents a thorough and meticulous process for drawing the human figure. This is definitely not a quick sketch approach. “On average, I put in about twelve three-hour sessions for each finished drawing.” Ryder works with either pencil on white paper or pencil and white charcoal on toned paper.

“I am often asked by students which pencils to use in a drawing. This is a little like asking which gears to use in your car. You should change pencils the way you change gears: at need.” He uses 2B for the initial stages of the drawing, later switching to softer pencils (3B through 6B) to work on the dark values.

The first step is the block-in. This is the foundation upon which the drawing will be built. Ryder’s approach is based on careful observation and point-to-point measurement.

“There are no preset proportional formulae in this drawing method. We don’t expect the figure to be so many heads high, nor the head so many eyes wide.” Likewise, Ryder does not use simplified structures like cones and cylinders. “In this approach, conventional shapes, such as eggs, cylinders, and cones, are not used as building blocks since they introduce a mechanical quality into the drawing. Our interest is to develop a drawing with character: the specific, undiluted character of the model. So we avoid the use of character-negating elements.”

He introduces the principle of nonparallelism, “based on the precept that the two opposing sides of the form are never parallel…  As a natural creation, the human body has a complex, organic structure… We have to build our drawings with asymmetrical, nonparallel, organic shapes—shapes that don’t correspond to our preferred way of thinking.”

The author also explains the importance of gesture to give the drawing a sense of life. “Gesture is life and movement. It is the energy inherent in the form of the model, a living energy coursing through his or her whole body. This isn’t called life drawing for nothing. We must literally and figuratively draw upon our own living energy, and that of the model, when we draw the figure. The people in our drawings should appear as if they are breathing, as if their hearts are beating. Gesture is the heart and soul of figure drawing. It animates our drawings. Without it, they are lifeless and meaningless… Always look for the natural movement of your model. Poses that pass for ordinary, hardly attracting any attention at all, can have a poignantly expressive quality.”

Last, but not least, is the tonal progression—defining three-dimensional form with light and shadow. “Every light source has its own character, a quality called the key of the light. And just as a sensitively rendered drawing will reflect the personality of the model, it will also reflect this ‘personality’ of the light.”

“It’s very easy to miss the quality of the light if you’re just copying values. Instead, you need to shape the light. This means molding the amount of light for each form, building up more light in one place and tapering it off in another. It means making value configurations within the linear structure of the drawing by allocating differing intensities of light according to the topology of the form.”

Tonal fabric is another concept which unifies the drawing. “Much as the block-in is one shape composed of many sub-shapes, inside drawing is really one continuous tonal progression consisting of many individual ‘sub-progressions.’ These sub-progressions should be applied so that their borders disappear; they should merge to become one, indivisible fabric.”

Does this all sound overwhelming? “If you could remember how long it took, when you were a child, to learn to do things that required coordination, like eating spaghetti or peas, you might have more patience with yourself when it comes to learning how to use a pencil. Like a musical instrument, the pencil can express the most delicate gradations of feeling, but we have to develop this ability through practice.”