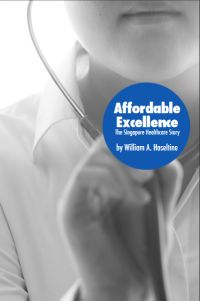 by William A. Haseltine

This book explains how the system works.

The Central Provident Fund (CPF) began under British colonial rule as a mandatory retirement savings plan and was later expanded to include savings programs for home buying, education, and healthcare. It works similarly to an American 401k plan. Employees contribute 20% of their wages and employers contribute 16% for a total of 36%. Between 7% and 9.5% goes to the medical savings account, depending on age. The worker contribution rates decrease at ages 50 and 65. The component parts that impact healthcare include:

Medisave is the mandatory medical savings program “used to pay for hospitalization charges as well as specified outpatient expenses… A S$30 deductible and a co-payment of 15% of the total bill still needs to be paid by the individual, but Medisave can be used to pay the remaining balance of the bill.”

MediShield is low-cost catastrophic health insurance. “Individuals are automatically insured under MediShield unless they specifically choose to opt out, and over 90 percent of the population is insured… In keeping with the philosophy that patients must bear responsibility for their healthcare, MediShield is not designed to pick up all costs. … [It] pays between 80 and 90 percent of the claimable amount that exceeds the deductible.”

Medifund is “the government endowment fund to aid the indigent… Elderly patients who have very low or no balances in their Medisave account are given priority for Medifund payouts. Subsidized patients who are unable to pay for outpatient and long-term care at approved institutions can also benefit from Medifund.”Only citizens are eligible.

“For patients facing serious cash flow problems, public hospitals may provide alternative arrangements, including installment payments… There is no documented case in Singapore of a patient being forced into bankruptcy due to inability to pay for his healthcare bills.”

“Public and private hospitals coexist in this market, but most hospital care is intentionally directed toward the public side through the patient incentives and subsidies… With the ability to set prices of services at the public hospitals, and with the ability to regulate the number of public hospitals and beds they provide, the government shapes the marketplace. It then allows market forces within that marketplace to regulate the private sector, which must not price itself out of the market. The system works because the extraordinarily high quality of the public hospitals has long been established and is scrupulously maintained.”

“In 2010, 80% of hospitalizations were in the public sector… with two-thirds of them subsidized.” There is no subsidy for Class A wards. Class C wards are subsidized up to 80%. “The government sets subsidy and cost-recovery targets for each ward class, which indirectly keep them from producing ‘excess profits’ associated with induced demand… In its 2012 budget, the government announced a lowering of the subsidy rates for permanent residents in order to sharpen the distinction in benefits received between citizens and permanent residents.” The government also subsidizes the cost of drugs.

“Patients are free to use either the public or private system, according to their willingness and ability to pay… In addition, as part of the system’s choice initiative, patients are allowed to spend their own money on care beyond the basic level, including amenities in public hospitals, private hospitals, private doctors, and other services… Means testing does not prevent patients from choosing a ward class of their choice. High-income earners, for example, can choose the C class ward, but the amount of subsidy provided would be lower, as would the amenities in the ward. Lower-income patients can choose one of the least subsidized wards, if they can pay for it.”

Beginning in 2010, Medisave dollars can be used for care in approved overseas hospitals where costs are lower. While only a small number of citizens use this feature—the book states that 127 Singaporeans had elective surgeries in Malaysia—it does add another element of competition to the system.

The Ministry of Health publishes hospital prices on its website “in order to bring transparency into the system, empowering patients with accurate information for making informed decisions regarding good-quality, low-cost treatment. The published information also encourages competition between healthcare institutions, motivating them to bring down the costs.”

Primary care is generally handled by private practitioners. This “stems from the philosophy that people must take responsibility for their own health. It follows that patients should pay for minor episodic ailments on their own and not rely on government subsidies to defray the cost.” About 20% of primary care is provided by highly-subsidized “polyclinics” serving low-income Singaporeans.

“The government has always made clear that a welfare system or an entitlement mentality has no place in Singapore. The need for ‘individualized responsibility’ and ‘self-reliance’ on the part of the citizenry in all personal matters, including healthcare, has always been an integral factor in the country’s achievements.”

“There is little doubt that the manner in which medical care is paid for has an impact on costs. Singapore has countered rising healthcare costs to a far greater degree than in all other high-income countries. Perhaps when people have to spend their own money, as the Singapore system requires, they tend to be more economical in the solutions they pursue for their medical problems. In contrast, in countries with third-party reimbursement systems, neither providers nor consumers of healthcare bear the major burden of cost. Since someone else is paying—government programs, insurance companies—there is little incentive to be prudent in decisions about which and how many tests and treatments are appropriate for a given situation.”

The Singaporean healthcare system is regulated to keep costs under control. For example, hospitals require government approval before adding new expensive technology or new specialties. Also, “the number of physicians and hospital beds in the Singapore system is purposely kept in check to avoid oversupply… The idea behind this action is to prevent excessive and undue use of healthcare services.”

“In another cost control measure, it became mandatory in 2008 for employers to purchase medical insurance for low-income foreign workers, such as construction workers and maids… The insurance ensures that the burden of caring for foreigners who cannot afford care is not carried by the citizens or the government.”

“Medical tourism is a growth industry for Singapore. The country has become a leading destination for foreigners seeking high-quality care at costs much lower than what they would have to pay in their home countries… Likewise, better-off patients from less-developed countries in the region… come to Singapore for high-quality specialist care not available in their own countries.” More than 400,000 patients from 60 different nations traveled to Singapore for medical care in 2006. The countries sending the most patients are Indonesia, Malaysia, the United States, Canada, and the United Kingdom, while the number of patients from China and the Middle East is increasing.

“The private hospitals are the main players in medical tourism… According to research by Nomura Asia Healthcare, about 30 percent of the patients at Singapore’s private Parkway hospitals and 40 percent in Raffles Hospital are foreigners.”

“Aside from the obvious benefit of injecting foreign dollars into the economy, medical tourism is important for other reasons.” Singapore has a relatively small population; “the addition of foreign patients allows doctors to sub-specialize. Also key is the fact that expensive, advanced technology becomes more cost efficient if it is allowed to serve greater numbers of patients. In effect, Singaporeans themselves benefit when they open their hospital doors to medical tourists.”

As with other developed countries, Singapore has an aging population. In 2012, the government announced a S$500 million program to build 10 nursing homes, 21 senior care centers, and 45 senior activity centers.

Singapore is a city-sate without the challenges of serving rural populations. Nonetheless, the efficiency of their healthcare model is undeniable. The mix of public and private facilities, price transparency, competitive market forces, intelligent regulation, and personal responsibility effectively keep quality healthcare affordable. Members of the U.S. Congress and other healthcare policymakers should take note.