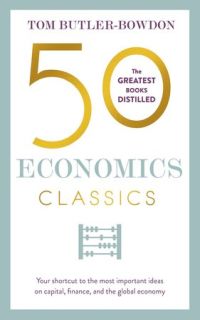 50 Economics Classics: Your shortcut to the most important ideas on capitalism, finance, and the global economy

Tom Butler-Bowdon has summarized 50 economics books spanning 240 years (1776 to 2016), however 40% of the books were published in the 21st-century, thus offering contemporary relevance with historical context. Indeed he notes in the introduction, “if there is anything that the financial crisis of 2007-08 told us, it is that economic and financial history matters.”

Each book is distilled to about six pages. Among the many topics covered are: the euro, the Great Depression, subprime loans and the 2008 financial crisis, the value of a college education, the economics of cities,  free trade, protectionism, globalization, the gold standard, income inequality, innovation and entrepreneurship, investing in the stock market, employment, technology, poverty, famines, crime, foreign aid, property, dead capital, and behavioral economics.

Here are some selected highlights.

The Rise and Fall of American Growth by Robert J. Gordon – 2016

“As wonderful as smartphones and the internet are, they are no match for [water mains and sewers] or the mass-produced automobile in dramatically raising living standards. As a result, the growth rate of the last 45 years has been less than half that enjoyed between 1920 and 1970.”

“The almost decade 1996 to 2004 saw a spike in productivity thanks to the diffusion of computers, but unlike the productivity increase caused by electricity, which lasted decades, the one involving computers lasted eight years. Today, Gordon says, most of the benefits of digitalization have already worked through the economy.”

“For all the array of new technologies coming out, from DNA sequencing to supercomputers, nanochemistry, and genetic engineering, we don’t know how life will be radically improved until these technologies play themselves out. Yet Gordon sees all of these as incremental rather than revolutionary… Rich countries can’t expect to keep growing at the rate of 1920-1970, any more than today’s China or India can expect to maintain growth rates of 8-10 per cent.”

“While the euro throws all the states in to the pot as if they are the same, there are yawning differences. For instance, the low-debt, low-deficit model that underpins the currency is a reflection of German attitudes to financial rectitude, particularly the horror of inflation, but it is perfectly legitimate for other countries to want to prioritize employment over inflation. Yet if you have a single currency and a central bank, how do you set interest rates: to prevent inflation at all costs, or to prevent unemployment at all costs?”

Innovation and Entrepreneurship by Peter Drucker – 1985

“‘The Entrepreneur,’ Frenchman J.B. Say said in 1800, is one who simply ‘shifts economic resources out of an area of lower and into an area of higher productivity and greater yield.’ This was the original definition—and the best, Drucker maintains.”

“Classical economics says that economies tend towards equilibrium—they ‘optimize’, which results in incremental growth over time. But the nature of the entrepreneur is to ‘upset and disorganize’. He or she is a wild card generating wealth through the process economist Joseph Schumpeter described as ‘creative destruction.’”

“The best innovations can be alarmingly simple, and often have little to do with technology or invention. For example, there was nothing technically remarkable about creating a metal container that could be easily offloaded from a truck onto a ship, but the advent of container shipping as a standardized system of moving things around the globe was an innovation that quadrupled world trade.”

“It is only when innovation meets the market through the catalyst of entrepreneurial management that you start to create things of great value. For example, De Havilland, the British company, produced the first passenger jet plane, but Boeing and Douglas took the industry lead because they created ways for airlines to finance such expensive purchases.”

“Her message is that economic dynamism comes from people being engaged in the ‘unroutine business of economic trial and error,’ that is, experiments which create new ways of doing things, and therefore new work. If this process is absent, a city, despite its size, can decline. Great cities do not simply produce more things, but new things.”

“One of her key points is that to develop new kinds of work, a place need to have many different sources of finance, since what people consider a good investment differs hugely. This ‘inefficient’ deployment of capital is actually what makes a city grow.”

“A key lesson from Jacobs’ work is that, because great cities grow organically, the main job of government is simply not to ruin what is already there, including the ‘inefficient’ streetscapes which prevent crime by increasing visibility, and which provide the vital social interaction that makes city life so interesting and productive.”

The Theory of the Leisure Class by Thorstein Veblen – 1899

“Veblen gave us the term conspicuous consumption.” He viewed capitalism as driven by pride and envy, and observed that we are “less influenced by those several classes above us, or people well below us in the social strata, than those slightly above. This has been borne out by psychological studies in the last 30 years, which suggest that, in terms or happiness, it is not our absolute wealth that matters as much as how wealthy we are in relation to our friends, neighbors, or co-workers.”

“Most human thinking, Shiller observes, ‘is not quantitative, but instead takes the form of storytelling and justification’ … [The] ‘buy low, sell high’ truth, unfortunately, is lost amid market frenzies, when it is believed that a ‘new era’ has begun in which higher than normal prices are justified by a new technology or demographic trends.”

“Shiller’s crucial insight is that big falls in the stock market generate hangovers lasting much longer than is commonly thought. After the stock market peak in 1901, for instance, there was a 20-year decline, only for stocks to rise again with the bull market of the 1920s. Then, after the Great Crash of 1929… the Standard & Poor’s Composite Index did not return to its 1929 value until 1958. Yes, there was a market boom from 1960 to 1966, but with the long bear market that followed, the market did not return to its 1966 levels until 1992.”

Shiller also puts real estate gains in perspective. “Viewed from the longer time span of history, home price growth has been less than real income growth, which has been around 2 percent a year from 1929 to 2013. The prices of most American homes have only increased by between 0.7 and 1 percent a year over a century. It seems like a big increase if your grandmother bought her house for $16,000 in 1948 and it sold for $190,000 in 2004, but not when adjusted for inflation. As with the idea of getting wealthy through stocks, the popular wisdom is wrong.”

“One of the biggest difficulties when analyzing data is whether there exists only correlation between variables, or actual causation. Causation can sometimes be very difficult to find and it can come from the most unusual of sources. ‘Dramatic effects often have distant, even subtle, causes,’ Levitt notes. His famous paper on abortion, published in 2001, suggests that the large reduction in crime in the 1990s ‘was, in the language of economists, an unintended benefit of legalized abortion.’ With such a controversial claim, Levitt came under sustained attack in the media and ‘managed to offend nearly everyone.’ However, he does provide a highly logical and persuasive argument for his opinion.”

“Levitt… suggested that the reduction in crime was set in motion a whole generation before it even occurred, with the 1973 Roe v. Wade Supreme Court decision.” How did this “‘trigger the greatest crime drop in recorded history?’ Two factors, Levitt says: childhood poverty, and single-parent households. He found these to be the strongest predictors that a child will have a criminal future, along with the limited education of the mother. The very factors that drive American women to abortion also predicts that their children, had they been born, would possibly have had criminal lives. Or as he puts it: ‘Legalized abortion led to less unwantedness; unwantedness leads to high crime…’ Since 1985, in those states that had high abortion rates, there has been a 30 percent drop in crime compared to low-abortion states.” (On a related note, The Art of Relevance included a statistic that 70% of California prison inmates are former foster youth.)

Poverty and Famines by Amartya Sen – 1981

“The poor cannot be seen as a monolithic group. For example, between the late 1960s and mid-1970s, although there was a fall in the total number living below a poverty line in Bangladesh, the number living in ‘extreme poverty’ (i.e. those with income not enough to meet 80 percent of the recommended calorie intake spiked sharply. Thus, the apparent rosiness of the official statistics hid a greater vulnerability to famine than before.”

The Mystery of Capital by Hernando de Soto – 2000

“When properly documented, assets ‘lead an invisible, parallel life alongside their material existence,’ de Soto says… When ownership cannot be clearly demonstrated, in contrast, an asset is ‘dead capital,’ because it can’t generate more capital through being securitized or collateralized.”

“De Soto’s team estimated that in developing and ex-communist countries, 85 percent of urban land, and around half of rural land, is dead capital. Yet combined, it was worth an amount equal to all the companies listed on the main stock exchanges of the richest countries, and twenty times all Third World foreign direct investment… Instead of giving, aiding, and loaning to the developing world, rich countries would be much more useful if they used their influence to facilitate formalization of already-existing assets.” Another benefit: “Law and order increases, because formal ownership rights make you respect the rights of others more.”

Butler-Bowden has done a great service in extracting the main ideas from so many books, representing a range of viewpoints. Some of the ideas may pique the reader’s interest to read the original text. In other cases, maybe not so much. The author comments on David Ricardo’s 1817 book: “It was not a great pleasure to read. In attempting to make economics more scientific, Ricardo wrote in a dry style that totally lacks the flourish and colorful examples of Adam Smith.”  The author has a Masters degree from the London School of Economics.

Butler-Bowdon, Tom. 50 Economics Classics: Your Shortcut to the Most Important Ideas on Capitalism, Finance, and the Global Economy. London: Nicholas Brealey Publishing, 2017. Buy from Amazon.com