Edible and Medicinal Mushrooms of New England and Eastern Canada 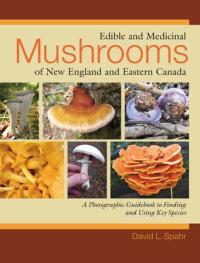 Edible and Medicinal Mushrooms of New England and Eastern Canada: A Photographic Guidebook to Finding and Using Key Species

This book presents photographs and information on more than 20 varieties of mushrooms, including how to find them and prepare them. For this review I will focus on the chapter on Maitake, which is being studied for its potential to boost the immune system and fight cancer.

“Also known as Hen of the Woods, Ram’s Head, Sheep’s Head, and Cloud Mushroom, Maitake [my-TAH-kay] is the Japanese name for the edible fungus Grifola frondosa.”

“It has a unique, truly excellent flavor that neither overpowers nor is easily overpowered. Maitake is delicious sautéed, deep-fried, microwaved, boiled, and dried. It has an extremely pleasant, crunchy, very chewable texture… The flesh of the Maitake is edible all the way to the base on the stem.”

“Evidence is increasing that this species is highly medicinal, boosting the immune system to fight cancer and stabilizing blood sugar and blood pressure. The Maitake may also have antihypertensive and antidiabetic properties.”

“There are breast cancer studies being conducted at Sloan-Kettering Cancer Center.” Curious to see if there are any results to these studies since the book was published, I checked the Sloan-Kettering website, which states: “Maitake is a mushroom that traditionally has been used in Japan and China as part of the diet and to treat diabetes and hypertension. Like other medicinal mushrooms, maitake contains a complex sugar called beta-glucan. In laboratory and human studies, maitake extract was able to stimulate various cells and factors in the immune system. Studies in animals show that it slows the growth of certain tumors and lowers blood sugar levels. More studies are being conducted to determine if maitake has the same effects in humans.”

Complementing the optimistic scientific research, the author shares an anecdote about his son’s sixth-grade classmate who was diagnosed with inoperable stage-two malignant brain cancer. “Radiation and chemotherapy were not an option because of the location of the cancer… After hearing this, I gave her mother about half a bushel of Maitake, which I had collected and dried. It was consumed as regular food at their house. Much to her doctor’s surprise, the cancer stopped growing. Her tumor has not disappeared but it has not grown or progressed as doctors had expected it to. It has been four years with no new growth and the only medication is the anticonvulsive. She has reached puberty and is healthy and attending school regularly.”

The author makes this warning. “If you have health issues or take medication, there is a possibility of interaction. Check with your doctor. Many doctors are not well informed about mushrooms, though. As always, sample a small amount at first.”

The book explains where to look for the species. “The Grifola frondosa is found from the end of August until as late as early November in some years on mature oaks that often have dying branches. Look in parks; on lawns; along edges; and in low, somewhat wet areas. Red oak is a particularly likely host… A tree will often have several to many individual fruit bodies… Young and middle-aged healthy trees seldom harbor Maitake.”

David Spahr is a photographer and a member of the Maine Mycological Association.