How to Think About Money 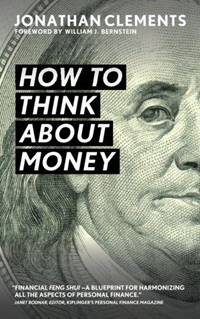 How to Think About Money

Jonathan Clements, a personal-finance columnist at The Wall Street Journal for some 20 years, advises how to think about work, debt, investments, and insurance at various stages of life. He puts an emphasis on preparing for retirement, starting at a young age.

“Chronologically, retirement might be our final financial goal, but we should always put it first. Amassing enough for a comfortable retirement is our life’s great financial task.” Given longer life expectancy, “we need to get ourselves on the right financial track as early in our adult life as possible, so we quickly achieve some measure of financial freedom.”

“When I talk to college students, I don’t tell them to follow their dreams. Instead, I tell them to focus on making and saving money…  As our sense of financial security grows, earning money becomes less of a motivator… Many people reach the point where they have the financial leeway to pursue the goals they find intrinsically satisfying. But others never get there.”

“For those age 50 or older who have done a decent job of saving and investing, their most valuable asset will probably be their investment portfolio. But for anybody who is younger, the value of their human capital [income-earning ability] will likely dwarf any other asset they own…  By thinking about our likely lifetime income and the constraints it imposes, we can get a better handle on the financial tradeoffs we need to make… We also need to be careful not to borrow too much. The size of our mortgage, and the amount of student debt we take on, should be guided by our likely earnings.”

“First, we should make it possible to save by keeping our fixed living costs as low as possible. We’re talking here about recurring expenses such as mortgage or rent, car payments, groceries, utilities and insurance premiums… My advice: Aim to keep your total fixed costs below 50 percent of pretax income.”

“Those who are self-employed, or who don’t have employer coverage, should seriously consider disability insurance, especially if they have little in savings and thus their financial life would quickly unravel if they couldn’t work… Keep in mind that the vast majority of disabilities are caused by illness, not accidents… Life insurance also makes sense for those who have families who depend on them financially, but who don’t have substantial savings.”

“Historically, over long holding periods, U.S. stocks have earned 7 percentage points a year more than inflation. Factor in 3 percent inflation and we’re looking at a nominal return of 10 percent a year…. Arguably, the U.S. stock market’s wonderful historical performance also can’t be repeated, because it reflects a one-time gain from rising valuations.” In 1915 companies were trading at 11 times earnings; by 2015 that multiple was up to 24. “Given today’s heady valuations, returns are likely to be significantly lower… I suspect long-run returns will be around 6 percent a year, while inflation runs at 2 percent.”

On a side note, the author notes that dividends “historically have accounted for almost half the market’s total return.”

Because earnings vary year to year, “focus less on trailing 12-month reported earnings and more on inflation-adjusted earnings for the past 10 years. The latter is the denominator used in the so-called Shiller P/E, names after Yale University economist Robert Shiller.”

Long-term investors needn’t fret about day-to-day fluctuations in share prices. Professional money managers often have a short-term outlook because they’re judged on annual returns, but “most ordinary investors have time horizons that are far longer than 12 months.”

“What if stocks subsequently tumble 15 percent? If we focus just on the price decline, we might be unnerved. To stave off panic, we should instead think about the market’s earnings and dividend yield. As prices fall, every $100 invested not only buys us more in dividends, but also more in earnings. If the market’s price-earnings ratio had been 20 and stock prices fall by 15 percent, the P/E would drop to 17. If we divide 100 by 17, we find the earnings yield is now 6 percent, rather than 5. Like a bond investor who can now buy at higher yields, we should be more enthusiastic about stocks, not less, because every $100 invested is buying us $6 in corporate earnings, rather than $5.”

Clements is a proponent of low-cost index funds. “Suppose that, for 40 years, we stashed money on a regular basis in a broad stock market index fund. Vanguard Group founder John C. Bogle calculates that we would accumulate 65 percent more wealth than an investor who owns an actively managed stock fund, with its higher trading costs, higher management fees and larger cash holdings… Moreover, the cost of active management isn’t nearly as modest as it appears. Yes, we might pay 2 percent of assets per year, which doesn’t seem like a huge sum when it’s framed that way. But in a world where stocks could return just 6 percent a year, we are surrendering a staggering 33 percent of our potential gain to investment costs.”

“Even if we have the tenacity to stick with a sensible investment strategy in the face of market turmoil, our investment gains won’t amount to much in dollar terms unless we have a decent sum invested in the market—and that takes good savings habits.”

“When we retire and start drawing down our nest egg, we will spend most of our savings on U.S. goods and services, so it seems wise to keep the bulk of our portfolio in dollar-denominated investments. Thus, while the U.S. accounts for roughly half of global stock and bond market value, I keep more than 60 percent of my stock portfolio in U.S. stocks and almost 100 percent of my bond market money in U.S. bonds.”

Clements notes that recovering from losses can take a long time, using the 2000-2002 dot-com crash as a case and point. “The Nasdaq Composite Index—widely viewed as a yardstick for tech stock performance—fell a jaw-dropping 78 percent. It wasn’t until 2015 that the Nasdaq Composite returned to its March 2000 peak (and, as of early 2016, it was once again below that level).”

Are you taking more risk than necessary? “If we have amassed enough money to lead the life we want, we have won the game. Why would we keep playing—and risk throwing away the financial security we have achieved? We might be comfortable keeping 70 percent of our portfolio in stocks. But if we have amassed sufficient savings that we don’t need great investment returns, it might make sense to throttle back our stock exposure to 40 or 50 percent [so there will be] less chance that we will die broke.”

“Once we retire and our paycheck disappears… our human capital ‘bond’ no longer pays us regular income, so it’s hard to be sanguine about plunging financial markets. A stock market crash could have a devastating impact on our ability to pay the bills. That’s why, as we approach retirement, we should shift perhaps half of our portfolio out of stocks and into bonds.” The precise allocation depends on what other income streams we have, such as Social Security, a pension, or an annuity we may have purchased.

“The shift toward bonds has two benefits. First, bonds typically kick off more income than stocks, so we will have more investment income to replace the lost income from our human capital. Second, and more important, we will have a buffer against stock market turmoil. Once retired, to generate enough spending money, we will likely need to sell a sliver of our portfolio’s holdings every so often… If we get hit with a vicious stock-market decline… we can always generate spending money by selling from the bond side of the portfolio.”

“An immediate fixed annuity might be viewed as a bond with a little insurance attached, in case we live beyond our life expectancy. By contrast, longevity insurance (sometimes called a deferred income annuity) can be seen as pure insurance, allowing us to hedge the risk that we will live a surprisingly long time and start to deplete our savings.” Clements cautions that variable annuities and equity-indexed annuities “are radically different products, involving far higher costs and far greater complexity.”

“The goal isn’t to get rich. Rather, the goal is to have enough money to lead the life we want. We shouldn’t put that at risk by incurring excessive investment costs, straying too far from a global indexing strategy and failing to buy insurance against major financial risks.”

This book would make an excellent graduation gift. Financial literacy is important at any age, but getting a solid footing early in life is a huge advantage.