A Consumer’s Guide to Information 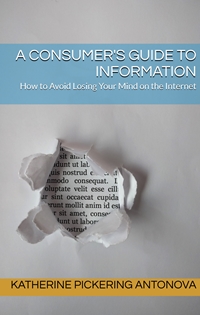 A Consumer’s Guide to Information: How to Avoid Losing Your Mind on the Internet

“Critical thinking is a rational process of sorting and weighing information so that we can find what we need and have confidence in what we know… We have to train ourselves to work past our first reactions… Even people who have many years of training and experience in research fields still need to constantly remind themselves to question their own biases.”

The theme of this book by history professor Katherine Pickering Antonova is evidence-based critical thinking. She covers the structure of logical arguments, logical fallacies, reliability of sources, the charade of opposing-view talking head television, search engine tips, and some basic concepts about science and statistics.

“The golden rule at the core of all critical thinking is: follow the evidence… When reading specific stories, as always look for evidence. Does the report leap to an explanation of why someone is doing something without showing how they know? That would be a bad sign.”

“Sources that are subject to some form of accountability are always preferable to sources with none, but we just approach either with a critical eye for evidence and reasoning… You can read with skepticism and an open mind, you can file away what you read without coming to judgment on it, and you can accept some parts while dismissing others (assuming you base those decisions on reasoning and evidence, not what fits whatever prior beliefs you brought to the text).” When consulting fact-checking sites, the author says to look beyond the conclusions. “The analysis should show you their evidence and reasoning, so you can judge it for yourself.”

“An argument… is a series of claims supported by evidence and reasoning… Claims are arguable statements… Evidence consists of real-world facts or data… Reasoning is the logic that links evidence to claims.”

“Engaging with people who disagree with you requires that you truly consider their views by entertaining the possibility that they may be right and you may be wrong. Of course, you may conclude at the end of that process that you still disagree, and that’s fine. But until you actually make the effort to fully understand and try out the other person’s position, your disagreement is baseless.”

“Ask questions… without asserting your own views. Really listen to the answers… No communications can happen without mutually recognizing the dictionary definitions of words and established rules of logic. If the person you’re speaking with refuses to do this, the conversation cannot continue… When you make your own claim, qualify them appropriately and avoid exaggeration. Say only what you can back up with evidence and reasoning… Don’t pretend to [agree with] things you don’t believe just to be polite and get along… Avoid emotional language, and responding to emotional appeals.”

“Criticisms… are evidence-based statements… If a criticism is unfounded, attack the evidence and reasoning that should support it, not the person who made it, even if they used harsher words than were necessary.”

“Bias is a systemic prejudice… A point of view, on the other hand, simply describes how any one individual person sees the world. This view is naturally limited—no one can know or see everything at once—but it is a view shaped by evidence… Neutrality is not a virtue, it’s just a state of not knowing or deciding. People who know—who have assessed relevant evidence and come to a conclusion—should have formed a position.”

“Our minds seek balance and fairness, and this is reinforced at tremendous volume by a media environment that emphasizes presenting two sides to everything rather than doing the more difficult work of fact-checking and researching multiple perspectives… In reality, however, any issue worth discussing has more than two sides, and the evidence probably does not shake out equally among all of them. Truthfulness is more important than neutrality.”

I like Antonova’s points about causation, because people have a tendency to draw simplistic conclusions whereas the world is often messier. “The following rules of causal reasoning well-known to professional historians are all too frequently ignored in public discussions of what caused what… There are always multiple causes. Don’t expect any single causal explanation to explain every case… There are always more than two sides, or ways of seeing an issue… Causal factors often function cumulatively… Nothing is inevitable. Every possible cause depends to some degree on other factors.” The above indirectly hints at the widespread problem of myopia: debating issues in isolation without knowledge of the broader context or systems within which they exist.

The author addresses conspiracy theories. “Actual conspiracies have, of course, occurred, like Watergate… Real conspiracies are notable, however, for involving small numbers of people, usually in direct contact with each other, who take risks that make sense in light of the concrete benefits they expect from the plot. Most real conspiracies also tend not to last long.”

Propaganda appeals to emotions like fear, anger, or sympathy. “Still another way propaganda takes advantage of our natural weaknesses is to play on the illusory truth effect, where we are more likely to believe a statement if we hear it often, even if we know at the start that it is untrue.”

The book includes a chapter on data and statistics. “Statistics are less accurate in explaining or predicting one individual’s behavior, but they are far more effective than our own experiences in predicting or explaining the aggregate behavior of groups… As always, the most reliable statistics will come from sources that disclose what data they gather, how they gather it, and the assumptions behind their analysis and the margin of error.”

“We also need to be wary of how data is presented…  It is vital to read the fine print associated with any data visualization. We must also examine the proportions of graphical shapes to see if they really match the numerical proportions being presented… Similarly, on charts with two axes, make sure the scales match what the chart is saying it will show, that a zero point is indicated, that all units are labeled and that the progression from one unit to the next is consistent.”

In the chapter on science Antonova writes, “One of the biggest obstacles to the public understanding of science is science reporting. For-profit news organizations… dramatize scientific results to exaggerate any part that could be made to seem dangerous, exciting, or absurd, or they make positive study results seem like life-changing discoveries that apply far more broadly than the researchers actually claim, while leaving out the limits and qualifications all reputable scientists impose of their conclusions so that they reflect no more than what the evidence can show…. Another way media reports can distort how we understand science is by focusing on a few unrepresentative but dramatic cases.”

“One of the best ways an ordinary person can explore the state of scientific knowledge on a question is to look at a review of all the most relevant studies, called a meta-analysis or systematic review… Reviews summarize all that is known on a certain question, and usually offer a conclusion about the current state of knowledge without adding the reviewer’s own interpretations. Meta-analyses combine data from many studies and do new statistical analysis on the larger dataset. Reviews and meta-analyses are written by people without a vested interest in the original studies.”

The author advises on the pitfalls of search engines. “Each search engine has its own algorithm, or formula, to determine how to rank your results… If you search, ‘Does broccoli cause cancer?’ Google will return results that say it does, even though those results are few and not well-supported. But if you type, ‘Is broccoli good for you?’ the results will begin with many articles explaining how great broccoli is… There are other search engines such as DuckDuckGo.com that do not rank your results this way.”

“Googling is not true ‘research.’ Real research is a slow process of examining and questioning what is known on a subject (not just what is online, but all of it!), gathering, testing, and interpreting new information, and bringing all that information together into new explanations and proposals, and then critically examining these, too… If you want to know what these kinds of experts say about how to solve problems and understand conundrums, you have to read books and articles published by professional publishing houses that vet every word they release… Many such books and periodicals primarily sit on public library shelves waiting for you to hold them in your hands, the old-fashioned way.”

The author advises that “the best way by far to acquire well-rounded critical thinking skills and specialist knowledge in at least one field is to enter a university degree program.” She adds, “Some readers may have already been to college without having encountered what they recognize as an education in critical thinking,” noting that “some programs are very narrow and applied.” I would add that I have observed many college graduates (even people with advanced degrees) who do not demonstrate critical thinking ability (or inclination) outside of their specialty. See also The Death of Expertise.

Antonova recommends curating your own newsfeed with “a variety of reliable, professional news organizations” including foreign press, many of which have English-language editions. She also shares a number of useful websites, including: archive.org, Cochrane.org, quackwatch.org, MediaMatters.org, newseum.org, and ReportersLab.org.

The world would be a better place if more people followed the practices outlined in this book when consuming news and discussing contemporary problems—especially complex problems which require deeper understanding rather than superficial soundbites. The Kindle version is $3.49 and it is available in paperback for $6.50.

Antonova, Katherine Pickering. A Consumer’s Guide to Information: How to Avoid Losing Your Mind on the Internet. Self-Published, 2016. Buy from Amazon.com