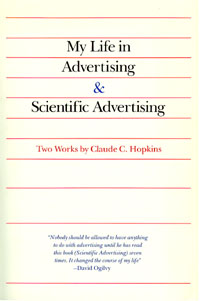 “Salesmanship-in-print is exactly the same as salesmanship-in-person.” If the purpose of advertising is to sell, then its effectiveness can be measured by resulting sales volume. Hopkins tested ads on a small scale before risking money on a large-scale campaign. He also compared results using different headlines in order to discover the best performing approach.

“Never seek to amuse. That is not the purpose of advertising.” Hopkins would likely be disturbed by a great deal of modern advertising where creativity overshadows salesmanship.

Hopkins used free trials to successfully penetrate markets, but he felt the word “free” cheapened a product. Instead he would say, “We will buy your first package.” He did not find it effective to give away samples to people who did not request them.

“Some say, be very brief… That would be an unthinkable handicap… Every ad, in my opinion, should tell a complete story. It should include every facet and argument found to be valuable. Most people, I figure, read a story once, as they do a news item. I know of no reason why they should read it again.”

The vocabulary sounds surprisingly modern, with a few exceptions here and there, such as dilatory, folly, palaver, rudiments, and trifle. The prices (one cent postage stamp) and car brands (Chalmers, Hudson, Mitchell, Overland, Reo, Studebaker) add a bit of early twentieth century flavor.

With today’s trend towards data-driven decisions and increased scrutiny of marketing budgets, this 85-year-old book is surprisingly relevant. While some of the techniques from Hopkins’ time may no longer be effective, the fundamental message of Scientific Advertising is timeless.