The Myths of Creativity 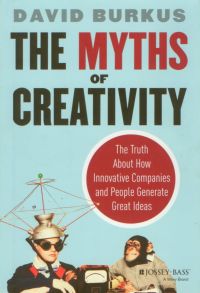 The Myths of Creativity: The Truth About How Innovative Companies and People Generate Great Ideas

“Creativity is the starting point for all innovation, and most organizations rely on innovation to create a competitive advantage.” In this interesting book, management professor David Burkus debunks 10 myths of creativity, citing academic research and examples from business.

The Eureka Myth is the misconception that creative ideas arrive in a spontaneous moment. Psychologist Mihaly Csikszentmihalyi found that “almost all of the people he studied shared a similar creative process that consisted of five stages: preparation, incubation, insight, evaluation, and elaboration…. Incubation is the stage where people briefly step back from their work… Taking a break from the problem and focusing on something else entirely gives the mind some time to release its fixation on the same solutions and let the old pathways fade from memory. Then, when you return to the original problem, your mind is more open to new possibilities.”

The Breed Myth is “the notion that creative individuals are a different breed from normal humans or that something in their genetic code draws them to more creative pursuits.” Many companies are structured under the assumption that some positions are filled with creative types and others are not. This chapter highlights a different approach at W.L. Gore, maker of Gore-Tex. “There are no real organizational charts, no ladders to climb, and no departmental distinctions between creative and noncreative roles… Without a series of management tiers, there is no formalized system for green-lighting projects… When someone has a new idea, he or she starts working to develop it and asks for help as needed. As people join the project, it gains momentum. If no one joins, the project suffocates.”

The Originality Myth is “the faulty belief that we would not have a given creation without its single creator and that the creator’s idea is wholly original… When Johannes Gutenberg invented the printing press in 1450, he did so by taking the concept of moveable type and applying it to the already existing technology of the wine press… Innovation comes from combining previously unconnected ideas… Inventors, marketers, and artists all utilize the raw materials of existing ideas to create new works… In their creative endeavors, people can only borrow from ideas and materials to which they have been exposed. The more environments and influences they open themselves up to… the more likely they are to stumble across the creative finish line first.”

The Expert Myth “argues that the hardest problems are solved by the brightest minds in the field, but the evidence counters with a different argument. The people who solve tough problems often come from the edge of a domain… Where creativity is concerned, it’s possible to become too engrained in a single domain and be too much of an expert.”

The Incentive Myth is the belief that people are primarily motivated by compensation. On the contrary, “intrinsic motivation comes from inside ourselves; it is the desire to complete a task for the simple enjoyment of the task. When we are naturally interested in our work, engrossed in it while we do it and thinking about it even when we’re not, we are intrinsically motivated.” Psychologist Edward Deci “found that the presence of certain extrinsic rewards could actually remove the intrinsic motivation that was already present in an individual.”

This chapter includes the story of how masking tape was invented by a 3M employee working on his own time. As a result, 3M created a policy in 1929 to encourage creative tinkering. “3M’s technical staff could spend up to 15 percent of their time working on projects of their own choosing without needing approval from their supervisors. The rule became known as 3M’s ‘bootlegging policy’ and is still in place today. According to the former head of R&D from 3M, most of the company’s core products emerged from time spent by bootlegging engineers.”

The Lone Creator Myth is “the belief that creativity is a solo performance.” Thomas Edison hired fourteen “engineers, machinists, and physicists who worked together on many of the inventions we now attribute to Edison alone.” Psychologist Kevin Dunbar found that “labs with more diverse teams of individuals–people from different backgrounds and working on different projects—generated more creative insights and produced more significant research.”

The Brainstorming Myth: The premise of this chapter is that brainstorming is rarely done effectively. Brainstorming was created in 1957 by Alex Osborn, founder of advertising firm BBDO. His system had three components: facts, ideas, and solutions. “Instead of jumping right to solutions… teams should have ample time to discuss the facts and information surrounding whatever it is that needs to be done… In addition, when most people brainstorm, they focus too much on ideas as individual entities, not as building blocks for more ideas.” Creativity and collaboration researcher Keith Sawyer explains, “The group’s power comes from the synergy that goes beyond the additive. What the most creative companies do is tell the members of the group to come up with lists of ideas before they come to the brainstorming session. What the group is really powerful for is exchanging ideas and then having ideas bump up against one another and merge in surprising ways that any one person might not have thought of on their own.”

The Cohesive Myth is the idea that creativity thrives in “teams that suspend criticism and focus on consensus.” Actually, “teams that seek to improve their ideas through debate are far more likely to generate innovative ideas… Conflict and criticism aren’t just useful for generating ideas. They may even be useful for elaborating on individual ideas and weaving them together into a comprehensive whole.” Pixar uses a method called plussing. “Whenever an idea is challenged or an animated frame criticized, that criticism must always contain a suggestion about how to improve the work—a plus… Without plussing, their morning [critique] sessions could get pretty negative and emotionally draining.”

The Constraints Myth is the belief that “creative potential is dampened by constraints.” The author quotes Jason Fried and David Heinemeier Hansson, executives with software developer 37signals and authors of Rework: “Limited resources force you to make do with what you’ve got. There’s no room for waste. And that forces you to be creative.”

The Mousetrap Myth says, “If you build a better mousetrap, the world will beat a path to your door.” The truth is, “even if you can build a better mousetrap, there is still a lot of work involved in selling the world on your new design… The world claims to want great ideas, but it rejects innovation all the time.” To overcome this problem, Rite-Solutions has an internal marketplace where employees can offer suggestions for product improvements. “Each employee is also given $10,000 in virtual currency to invest in whatever ideas intrigue him or her… But employees don’t just invest money; they also volunteer their time and expertise to help potential projects.”

“Creativity isn’t just about novel ideas. Those ideas must also be useful in order to be truly creative… Creativity will be strongest when an intrinsically motivated person with significant creative thinking skills and a given level of expertise operates in an environment that supports creativity. Innovation happens when these factors align and the resulting creativity is applied.”

4 thoughts on “The Myths of Creativity”