100 Words Almost Everyone Confuses and Misuses 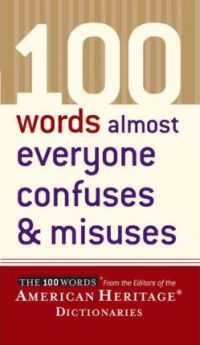 100 Words Almost Everyone Confuses and Misuses

by the Editors of the American Heritage Dictionaries

Here are some examples of frequently misused words from the book.

Altogether means entirely. A second meaning I did not know is “a state of nudity. Often used with the: The artist’s model posed in the altogether.” Altogether does not mean the same as all together.

Enervate means to weaken, not energize.

Enormity means “the quality of passing all moral bounds… a monstrous offense or evil.” It does not mean enormousness.

Impeach means “to charge (a public official) with improper conduct in office before a proper tribunal… This is only the start of what can be a lengthy process that may or may not lead to the official’s removal from office.” For example, Bill Clinton was impeached by the House of Representatives on December 19, 1998, but he was not convicted by the Senate.

Inflammable means the same as flammable. The opposite is nonflammable.

Kudos means “acclaim or praise for an exceptional achievement.” It is singular, but is often mispronounced as plural. The s is pronounced the same as in the word pathos.

Peruse means “to read or examine, typically with great care.” It does not mean to skim.

Precipitous means “resembling a precipice; extremely steep.” Do not confuse with precipitate.

Proscribe means to forbid, to denounce, or to banish. “Some senses of proscribe and prescribe are opposite in meaning. But because the two words sound similar, they’re often confused.”

Reticent means “to keep one’s thoughts, feelings, and personal affairs to oneself.” It does not mean reluctant.

Unexceptionable means “beyond any reasonable objection; irreproachable.” It does not mean unexceptional.

Wherefore means why, not where.

Wreak means to “to inflict (vengeance or punishment) upon a person…Wreak is sometimes confused with wreck, perhaps because the wreaking of damage may leave a wreck: The storm wreaked (not wrecked) havoc along the coast. The past tense and past participle of wreak is wreaked, not wrought, which is an alternative past tense and past participle of work.”

Other words clarified in the book include: adverse and averse; affect and effect; aggravate; alleged; among (amongst) and between; assure, ensure, and insure; auger and augur; average, median, and mean; blatant and flagrant; capital and capitol; complement and compliment; comprise; consul, council, and counsel; convince and persuade; discreet and discrete; disinterested and uninterested; factoid; fewer and less; flaunt and flout; forte; gender and sex; hopefully; impact; imply and infer; incredible and incredulous; irony; its and it’s; lay and lie; leave and let; literally; mass and weight; mischievous; nuclear; parameter; phenomenon; plus; principal and principle; renown; sacrilegious; seasonable and seasonal; sensual and sensuous; set and sit; that and which; unique; utilize; and zoology.

Wherefore not peruse this presently?