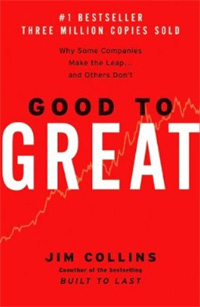 Good to Great: Why Some Companies Make the Leap… and Others Don’t

Only 11 companies met the criteria. An example is Walgreens, whose stock performance from 12-31-75 to 1-1-00 outperformed Intel by 2x, General Electric by 5x, and the overall stock market by 15x.  Eleven competitors were also studied for comparison.

The research identified seven commonalities among the good-to-great companies, which the comparison companies did not have:

Here are a couple of notable of quotes from the book.

“Consensus decisions are often at odds with intelligent decisions.”

In the epilogue, the author makes an interesting point about the role of the board of directors with regard to managing a company for enduring success. “Boards at corporations should distinguish between share value and share price. Boards have no responsibility to… shareflippers; they should refocus their energies on creating great companies that build value for the [long-term] shareholders.”

This book was published in 2001.  It seems odd to find Fannie Mae and Circuit City in an elite set of top performing companies. However, the author does emphasize that the only way to stay great is to continue to apply the principles.

3 thoughts on “Good to Great”