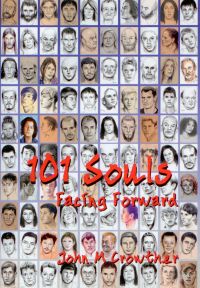 When we think about history, especially ancient history, the vast spans of time can become a blur. In his book 101 Souls, John Crowther provides a new framework which puts history in the context of lifetimes. “Imagine a line of people stretching back through time to the beginnings of what we think of as civilization… 6000 years ago. Consider that each individual was born the year that the preceding individual dies, and that each lived to be 60 years old.” Simple math reveals that there would be only 100 lifetimes separating us from the beginning of civilization.

While life expectancy was shorter in the past, the average was dragged down by infant and child mortality. Thus the premise of a 60-year lifespan is quite plausible. “It’s important to understand I am not talking about generations… The life of an individual can include three and conceivably four generations of a family. Our instinct when gazing back into the murky recesses of history is to think in terms of generations, thus making events seem even further in the past.”

“It will surprise many to know… that we would be unable to understand the language being spoken by the 28th person in line were he or she a native of the British Isles. They would be speaking a tongue that was the precursor to Old English, something that sounded more akin to German. Indeed, we would be hard-pressed to understand the 10th to 17th person in line for they would likely be speaking Middle English, the language of Chaucer. How many among us can decipher the opening lines of The Canterbury Tales without some effort? They would pose no problem for the 10th person in line, though it’s highly likely he would not know how to read.”

After a 14-page introduction there is a page for each of the 100 people, including interesting historical context about the world at that time as well as a portrait drawn by Crowther, who is a member of The Portrait Society of America. “A painting or drawing is the record of the relationship between the artist and the subject matter over the period of time it took to complete it…The artist’s attitude toward the subject matter evolves as he works sometimes gradually and sometimes in an ‘aha’ moment… This doesn’t make it superior to a photographer’s work, just different… I have attempted, with varying degrees of success, to look inside the subjects of these drawings, catching at best a fleeting glimpse of their experience of life.”

The 100 portraits are all of living people and thus are somewhat disconnected from the lifetimes they represent. “My intention was not to achieve anthropological accuracy.” Given that human figures drawn by Michelangelo look very much like human figures today, I wonder if nude figure drawings would have made a more timeless impression than portraits. Maybe.

“This is not meant to be a history lesson… Again, my purpose is an overview, dramatizing how much has happened in such a relatively short time.” Here are some samples of historical context from pages of the book:

The title is 101 Souls, but there are only 100 drawings. The last page is “dedicated to the 101st Soul, as yet unborn, who will create a world without strife, in which all men and women will respect the right of all others to live, think, and worship as they desire.” Good luck with that, 101.