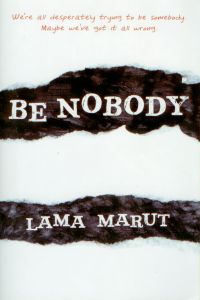 Lama Marut, aka Brian K. Smith, was a professor of comparative religion, he studied Hinduism and Sanskrit in India, he was a Buddhist monk, and he is the son of a Baptist preacher. So he presents a well-informed viewpoint rather than a myopic dogma. Fortunately, you don’t need to climb a mountain to be enlightened by this wise man; he imparts wisdom in his book, Be Nobody.

Marut writes about living in the iEra. “Our contemporary culture of consumerism, materialism, narcissism, and the worship of fame encourages the idea that we will be happy only when we become exceptional. But maybe we’ve got it wrong—exactly wrong. Maybe our deepest and most authentic happiness will be found only when we finally lay down this heavy burden of trying to be a somebody… Maybe true fulfillment in life requires an emptying, not a filling.”

The author refers to our ego-driven somebody self. “Posing less as a ‘special somebody’ and being more of just a ‘Ordinary Joe’ infuses our individual existence with more humility, more of a sense of connection to the world and the people in it, and much more true and abiding contentment and joy… But if we overvalue the idea that self-worth is tied to a created specialness, most of us will never feel we have produced a special enough self.”

In contrast, our nobody self is something deeper. “It is our ‘true self’ or ‘Buddha nature,’ the immortal soul, the Ground of Being, the atman, or the Tao… All of these descriptors point to the fact that the ‘nobody self’ is the exact opposite of the ‘somebody self.’ When our true nature is depicted, it is as a kind of reverse image of the limited, flawed, mortal and basically disgruntled self we are so attached to.”

“Practicing being more anonymous, and posing less as the amazing special somebody we all think we are, is an acknowledgment of our basic commonality… By recognizing that we’re nobody (that is, that we’re not a hard-wired somebody…), we have the possibility of conceptualizing ourselves as a better somebody—a more contented, happy, and fulfilled person.”

A brilliant part of this book is the reality mantra: “It’s like this now.” Who could argue with that? “The secret to feeling better about ourselves and our lives… is not to expect the world and others to be different than what they are… We play the hand we’ve been dealt with wisdom and skill… We are in every moment creating the causes for who we will be in the future. For our future happiness, or its opposite, depends on what we do, say, or think in the ongoing present… It is the wish that things were not like this now that defines our unhappy state—what we’ve called the ‘if only’ syndrome.”

Marut explains that karma is your conscience and consciousness. “There’s no enduring, abiding self that has karma. The conceptualization we have of ourselves is karma. The memories that shape our self-image… pervade our consciousness… So one way to improve the conception of the self is to rehabilitate the memories we are carrying around. The past is never like it used to be. It is forever undergoing reinterpretation …. One of the principal ways of practicing karma is to replace the drone of What’s in it for me? with What can I do for you? … The most effective karmic management assumes some version of contentment, and with contentment we have the possibility for pure action—action done truly for its own sake.”

Psychologist “Mihaly Csikszentmihalyi has observed that we’re happiest when we’re in this condition of pure awareness. He has famously labeled it ‘flow,’ defining it as the state ‘in which people are so involved in an activity that nothing else seems to matter… Most importantly for our theme, this state of heightened awareness—full absorption in what one is doing—is also characterized by the loss of self-consciousness… The ‘somebody self’ disappears when we are truly happy; the inner voice shuts up… There is, however, a difference between being mindlessly absorbed in an activity—passively watching television or a movie or staring at the computer, for example—and what we might call mindful unselfconsciousness in our actions.”

Marut notes that “any activity can be made much more enjoyable and rewarding if it’s done for its own sake… Any endeavor we do with mindful unselfconsciousness can get us into the flow.” He draws a parallel with play. “The point of play is found not in the completion but in the process…. Children, before they are taught that the point is to ‘win,’ exemplify the pure version of playful activity… Kids get totally and tirelessly absorbed in what is, after all, purposeless action.”

The author writes about mental afflictions. “Pride is one of the principal causes of depression and low self-esteem. What is elevated too high will fall very low…. In the short run, pride can only sustain its illusion of superiority by remaining a big fish in a small pond… Feeling guilty about our failures, like the depression that often feeds on such guilt, is really just another form of narcissistic self-absorption. It doesn’t help, and in fact it saps the energy we need to feel better about ourselves. Regret, on the other hand, is the acknowledgment that giving in to the mental afflictions hurts oneself and others…. Constant fretting and stressing out about the future just ruins the present and, in general, spoils the limited time we have here on earth.” He also writes about losing our cool—what Pema Chӧdrӧn refers to as shenpa. “With wisdom we understand that it is never in our self-interest to be anything other than cool, calm, and collected.”

The author comments on religion in general. “Those who are practicing religion… are practicing being more expansive and inclusive in their love, compassion, empathy, and sense of interconnectedness with others. And those who aren’t practicing the true intent of religion are in the business of creating more, not less, divisiveness and ill will among people—often very loudly. Religion, it has been said, is like a swimming pool. All the noise is coming from the shallow end.”

And he makes a side note about his own religious affiliation. “In October of 2013, I made the difficult decision to give back my monk’s vows after living for eight years as an ordained monastic… Being a monk in the Tibetan Buddhist tradition no longer seemed to accord with my developing nondenominational spiritual orientation, nor with the [desire] to try to live more as a nobody instead of a special somebody.”

In closing, Marut points out that “happiness can only be founded in truth, not in illusion. Remember, they say nobody’s perfect. So why not be nobody?”

Marut, Lama. Be Nobody. Hillsboro, Oregon: Beyond Words, 2014. Buy from Amazon.com