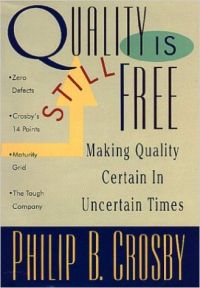 by Philip B. Crosby

Philip B. Crosby (1926-2001) created the Zero Defects performance standard. I only recently became aware of him through a reader comment on a Wall Street Journal article. Crosby joined ITT in 1965 as the conglomerate’s first director of quality. In 1979 he founded Philip Crosby Associates, a firm which trained 12,000 executives and managers through its Quality College.

“I built the Quality College around the Four Absolutes of Quality Management as they had evolved for me over the years:

“Quality is free” means it is cheaper to do things right the first time. “The price of nonconformance is the expense of doing things wrong. It is the scrap, rework, service after service, warranty, inspection, tests, and similar activities made necessary by nonconformance problems. Between 1967 and 1977, the manufacturing cost of quality at ITT has been reduced by an amount equivalent to 5 percent of sales.” The ITT comptroller estimated that elimination of defects saved $530 million in 1976. “I realized that we had a tool that would focus the operating executives… They lit up when they saw that they could actually make money by learning how to do things right the first time.”

This applies to service industries as well. “These nonmanufacturing companies did not immediately recognize that they spent about half of their effort doing things over. What the hotels looked at as gracious attention to the guest was actually rework…  In those industries the price of nonconformance is 40 percent of the operating costs.”

Quality management is also relevant to knowledge workers. “The biggest single problem we face in doing our work is the communication that links our work together… We receive data from someone. We decide something on the basis of data, we transmit something along the line, and we add our two cents’ worth to it. If we have not made certain about what we have done, then we can set the entire chain off in the wrong direction.”

Crosby was critical of statistical quality control systems. “The nonconformance situation semiconductor suppliers found recently emerged from embracing the standard of Six Sigma. This permits 3.4 defects per million components. Why anyone would want to do that is beyond me… When even ordinary chips contain a million or more components, such a standard means that they are all defective.”

He believed that the foundation of quality was a culture of prevention. This is not something that management can delegate to the quality control department. “Quality, meaning doing what you said you would do, is not an added factor but the absolute essential component of a successful enterprise… It took five to seven years of unrelenting effort to achieve the cultural revolution at ITT.”

“We need to learn to view the actual act of handing the customer our completed transaction as the very point of the business pyramid. The little sharp tip of the pyramid is the act of depositing that person’s check in our account. The great mass below that peak consists of thousands of actions that have to be done in order to receive payment and even gratitude… The purpose of quality management is to build an organizational culture in which transactions are accomplished completely, efficiently, the first time.

Crosby has a lot to say about the relationship between management and staff.

“I tend to see things in terms of those who must finally wind up doing the job. I see concepts and their implementation as people-oriented… The role of senior management is more vital here than in any other place in the organization. All employees are extremely sensitive to the way management feels about people… If management thinks people don’t care, then people won’t care… But if the employees feel that the management is taking their well-being into consideration, is helping them be prepared to do a good job, and has a sensible benefits program, then the beginning of a relationship exists.”

“When workers, whether in an office or a factory, feel that they are just a cog, they act like cogs. Letting small groups do complete jobs is just one way of getting around that feeling… People work enthusiastically when they feel they are a vital part of the operation, and they are slothful when work is imposed on them.”

“Many companies worry about their unions, but there is no need for concern if they are brought into quality awareness up front. I always insisted that the senior executives of the company and those of the union attend class together… The purpose of quality awareness is to let everyone feel that they, as individuals, belong to this new company attitude. Giving them information in a positive and open manner sets the tone to change the culture to one of care and prevention.”

“Building a culture of prevention raises the intellectual level of the company. It generates ideas and actions.”

Quality is Still Free is essentially a memoir of Crosby’s career. He wrote several other books including Quality is Free in 1979, Quality Without Tears in 1984,and  Leading: The Art of Becoming an Executive in 1989.

3 thoughts on “Quality Is Still Free”