“Tragically, more than 70 percent of change efforts fail and in most cases the organization emerges weaker—exhausted, demoralized, and confused.”  To combat this, authors Auster and Hillenbrand have coined the portmanteau word “Stragility” to represent a skill set for “strategic, agile, people-powered change… Without ongoing agility, even good strategies will fail.”

In the chapter on strategy, the authors talk about the ability to sense and shift. They also introduce “backcasting”—as opposed to forecasting—“to envision possible futures the organization or unit aspires to and then work backward to develop the key phases of a storyline that might lead to those visions… [Ask] what would have to be true for various options to work.”

Chapter 3 is about building support. “Politics has become a dirty word… And yet politics are inherent in every change… In any change we lead, we must focus on the substance of the change and the relationship.”

“Many strategic changes derail because, in an effort to circumvent politics, we engage critical players in the organization too late. An important step to attain Stragility is to work with both supporters and skeptics early in the process… Including key stakeholders from the beginning is crucial for developing the multi-angled input needed for Stragility. Our stakeholders can offer important insights about how the organization is currently performing, external factors that may come into play, and ideas for improvement. Key stakeholder engagement is also critical for ensuring effective implementation as well as cultivating enthusiasm and receptiveness to new initiatives over time.”

“Often values, strategy, and culture that made the firm successful in the first place can help support the new change. Indeed, McKinsey & Company found that organizations that understood and built on strengths when planning transformation were twice as likely to succeed than those that focused primarily on problems.”

Chapter 4 is about inspiring and engaging. “How we frame things has much to do with how it transpires.”

“One of the most powerful learnings we see over and over again is that by going slower, we actually go faster. It seems counterintuitive, but taking the time to build passion, engage with people, help them understand, ask for ideas and input, work through their concerns, and map implications and details in the early days of a transition or turnaround increases the likelihood that the change will be successful and will actually be faster in the end. That insight is echoed in a study by McKinsey & Company showing that the best way to build by-in is to give the people most affected by change a role in shaping it.”

The authors quote Starbucks CEO Howard Schultz on the importance of face-to-face communication: “For all the promise of digital media to bring people together, I still believe the most sincere, lasting powers of human connection come from looking directly into someone else’s eyes with no screen in between.” 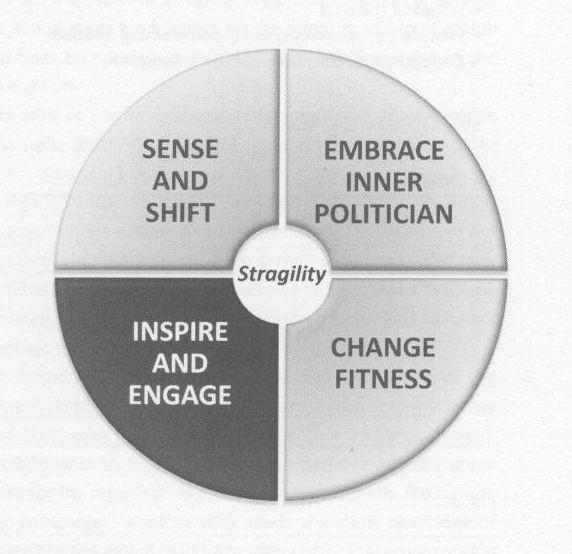 Chapter 5 is about change fitness. “We need change less so we can accomplish more. We can do this by sunsetting, or shutting down projects that are no longer important, and by prioritizing the critical projects that remain. We can also run water through the pipes by testing and piloting on a smaller scale before rolling out and developing contingency plans.”

The authors write about the importance of keeping employees energized, physically and emotionally. “The sleep-deprived are more likely to make errors, be rigid, be less creative, be distracted, and lack good judgment, all traits that are pretty counterproductive for Stragility… Ernst & Young found that each additional day of vacation taken by their employees yielded an 8 percent increase in their end-of-year performance ratings and that those who took their vacations were also significantly less likely to leave the firm.”

“By doing pre-mortems and developing contingency plans, we develop the ability to make better choices to begin with… In doing so, we develop the capability to be adaptable and bounce forward with the unexpected events that almost inevitably arise. These are essential change fitness skills that help battle change fatigue.”

The book cites examples from a variety of well-known organizations including Kaiser Permanente, KFC, Macy’s, Procter & Gamble, Starbucks, and the US Navy. However, a story that especially resonated with me is about a smaller company called Dematic. This logistics equipment manufacturer has “changed ownership half a dozen times since the family of the founder sold it in 1980.” In 2007 a new CEO was brought in to turn around the troubled firm.

“They brought back the pride in the organization and re-engaged some skeptics by naming one if its big new products Rapistan—the old company name. One of its many owners had forbidden employees to mention the old company name… People were delighted that, despite all the changes, they still had connections to their heritage. They also brought back their ‘Little Red Schoolhouse’ training center from the 1960s for use in their marketing materials.”

This story points out how poorly-executed changes can suck the soul out of a company.

One observation I have about this book is that several of the ideas are consistent with The Toyota Way, another excellent book.  The authors explicitly cite Toyota’s five-why analysis, “a simple but very effective means of drilling down to root causes.” The emphasis on involving stakeholders early in the process is consistent with Toyota’s nemawashi principle, or consensus building.  And the idea of spending time on the front lines reminds me of the genchi genbutsu principle, seeing for yourself firsthand. As Auster and Hillenbrand write, “Often our view of change from a distance is far different from the realities on the ground.”