The Truth About Art: Reclaiming Quality 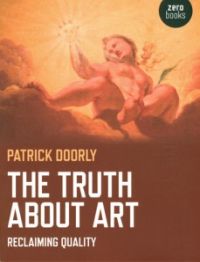 The Truth About Art: Reclaiming Quality

“Quality is not a thing but an event. When the subject [viewer] becomes aware of the object [art], quality describes the relationship that binds them… Beauty does not lie in the eye of the beholder, but that eye and the mind behind it form one half of the dynamic relationship we experience as beauty.”

The quality experience is preverbal. “It operates prior to intellectualization.”

Doorly discusses the metaphysics of quality, a concept introduced by Robert Pirsig in his book Zen and the Art of Motorcycle Maintenance. “Pirsig divided Quality—the response of an organism to its environment—into Dynamic Quality [creativity] and Static Quality [tradition]. The Quality event is Dynamic, overriding rules and convention, while a Static Pattern preserves whatever value remains after its passing.”

“In terms of the metaphysics of Quality, a canon of excellence represents the Static Patterns that embody the best achievements in a given field, as identified by those professionally employed in it. It is always subject to challenge, modification, supplement, and even overthrow, when a new canon will emerge… In time rules would not be transgressed, but transcended.”

This model is analogous to the scientific method. “The modern scientist must have thoroughly absorbed its Static Patterns, while remaining open to interventions of Dynamic Quality that generate hypotheses.”

“All human artefacts start from… the Static Patterns—or schemata—that form a culture… A general word for what artists of all periods and places have always sought is Quality. With a sequence of schema-and-correction guided by Quality, we have a model for the practice of art.”

“Human culture is a continuum, in which the achievements of one generation form the starting point of the next, whether or not they acknowledge the debt…. No one becomes an accomplished painter, sculptor, writer, musician, or architect without having recognized excellence in previous examples of those arts, and taken that excellence as the starting point for new work.”

“A ‘completely original’ artist, if we could imagine such a thing, would be a madman operating in a culture of one.”

Doorly debunks the notion that old masters acquired their talent and ideas through divine inspiration rather than building on the skills and ideas of their predecessors. He includes interesting historical anecdotes about the training and inspiration of Leonardo, Michelangelo, Rembrandt, Goya, and Shakespeare.

“To describe Leonardo as a Genius… panders to the human desire to worship rather than understand.” I guess this is not unlike the obsession with celebrities which pervades contemporary culture.

The book includes an interesting chapter on anti-art.

“There have also been art historians who champion the ‘aesthetic’ merits of Duchamp’s urinal… Duchamp, however, was still alive in the 1960s, when these views were gaining currency, and in interview after interview the old magus patiently explained that his intention had been quite the opposite. He had sought an object with no aesthetic qualities whatsoever, and had hit upon a mass-produced urinal as best fulfilling that need… The Fountain was meant to test the [Society of Independent Artists’] adherence to its own rules, which required acceptance of any submission for which the requisite $6 fee had been paid.”

“Duchamp had discovered that affronting people’s expectations, based on the Static Patterns of a tradition, could propel the Artist to celebrity status regardless of the quality of his work… Duchamp’s intellectual pranks would, over time, themselves become canonical, celebrated gestures in the history of early twentieth-century modernism that still holds critics and fine artists in their thrall.”

“Today, however, after ceaseless social change has left us with the insecurities and loss of direction of postmodernity, we need works of the imagination to forge new social and intellectual values, not further undermine the established few that remain.”

If art is “high-quality endeavor” then why do we use the word so liberally? Doorly contends that the term art “was misapplied to designate a category of objects or a class of activities… in the mid-eighteenth century… No general label for painting, sculpture, and architecture had existed in Renaissance Italy, where the practitioners of those arts were not called artists.”

One thought on “The Truth About Art: Reclaiming Quality”