101 Things I Learned in Engineering School 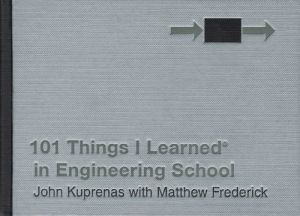 101 Things I Learned in Engineering School

by John Kuprenas with Matthew Frederick

Engineering involves the application of mathematics, physics, and chemistry, but “the heart of engineering isn’t calculation; it’s problem solving,” writes John Kuprenas, a civil engineer. Here is a sampling of his insights.

“There’s always a trade-off. Lightness versus strength, response time versus noise, quality versus cost, responsive handling versus soft ride, speed of measurement versus accuracy of measurement, design time versus design quality… It is impossible to maximize the response to every design consideration. Good design is not maximization of every response nor even compromise among them; it’s optimization among alternatives.”

“An object that receives a force will remain stationary, move, or change shape—or a combination. Mechanical engineering generally seeks to exploit movement, while structural engineering seeks to prevent or minimize it. Nearly all engineering disciplines aim to minimize changes in the shape of the designed object.”

“Steel and concrete have near-identical coefficients of thermal expansion: if they did not, a steel-reinforced concrete beam would tear itself apart upon ordinary temperature change. More often, materials are not neutral toward each other,” as the following story illustrates. “Monel metal is a very hard alloy of nickel, copper, and iron. It is extremely corrosion resistant and is excellent for wet applications. However, in 1915, a ship was built with a hull entirely on Monel, with the expectation of an exceptionally long life. Unfortunately, the 215-foot-long, 34-foot-wide Sea Call had to be scrapped after six weeks of use. The Monel hull was fully intact, but the steel frame of the ship deteriorated beyond use, from electrolyte interaction with the Monel in the saltwater environment.”

“At the point a designer is invited into the design process, many assumptions have been made about the nature of a problem, and the desirable solutions. The wise designer begins by moving backward—investigating what caused the problem, what caused the causes, and what caused those causes. This reveals possibilities that might be very different from what the end user anticipated, but that meet the true need most effectively.” This reminds me of the five-why analysis discussed in The Toyota Way.

The book provides a good selection of concepts for prospective engineering students, especially those interested in civil and structural engineering. The title not only refers to the number of items presented, but is also a word play (intentional or not) on the introductory course number Civil Engineering 101.

One thought on “101 Things I Learned in Engineering School”