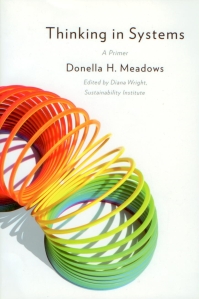 Systems thinking helps to understand how things work in so many contexts, including ecological, economic, and social. This book explains the elements and dynamics of systems and points out some of the common traps in trying to manage them.

“A system is an interconnected set of elements that is coherently organized in a way that achieves something… A school is a system. So is a city, and a factory, and a corporation, and a national economy. An animal is a system. A tree is a system, and a forest is a larger system that encompasses subsystem of trees and animals.”

“Stocks usually change slowly. They can act as delays, lags, buffers, ballast, and sources of momentum in a system. Stocks, especially large ones, respond to change, even sudden change, only by gradual filling or emptying.”

“Systems happen all at once. They are connected not just in one direction, but in many directions simultaneously… Pictures work for this language better than words, because you can see all the parts of a picture at once.”

“Large organizations of all kinds, from corporations to governments, lose their resilience simply because the feedback mechanisms by which they sense and respond to their environment have to travel through too many layers of delay and distortion.”

“Systems thinking goes back and forth constantly between structure (diagrams of stocks, flows, and feedback) and behavior (time graphs)… You can’t navigate well in an interconnected, feedback-dominated world unless you take your eyes off short-term events and look for long-term behavior and structure.”

“Systems surprise us because our minds like to think about single causes neatly producing single effects… But we live in a world in which many causes routinely come together to produce many effects.”

“Markets tend toward monopoly and ecological niches toward monotony, but they also create offshoots of diversity, new markets, new species, which in the course of time may attract competitors, which then begin to move the system toward competitive exclusion again.”

“Addiction is finding a quick and dirty solution to the symptom of the problem, which prevents or distracts one from the harder and longer-term task of solving the real problem. Addictive policies are insidious, because they are so easy to sell, so simple to fall for.”

“Similarly, if you are running an ineffective company, and if you can get the government to subsidize you… Or perhaps you are a farmer trying to increase your corn crop on overworked land. You apply fertilizers and get a bumper crop without doing anything to improve the fertility of the soil. The trouble is that the states created by interventions don’t last. The intoxication wears off. The subsidy is spent. The fertilizer is consumed or washed away. Examples of dependence and burden-shifting systems abound.”

“Shifting the burden, dependence, and addiction arise when a solution to a system problem reduces (or disguises) the symptoms, but does nothing to solve the underlying problem.”

“If the intervention designed to correct the problem causes the self-maintaining capacity of the original system to atrophy or erode, then a destructive reinforcing feedback loop is set in motion. The system deteriorates; more and more of the solution is then required. The system will become more and more dependent on the intervention and less and less able to maintain its own desired state.”

“One of the most powerful ways to influence the behavior of a system is through its purpose or goal. That’s because the goal is the direction-setter of the system, the definer of discrepancies that require action, the indicator of compliance, failure, or success toward which balancing feedback loops work. If the goal is defined badly, if it doesn’t measure what it’s supposed to measure… If the desired system state is national security, and that is defined as the amount of money spent on the military, the system will produce military spending. It may or may not produce national security.”

“Be especially careful not to confuse effort with result or you will end up with a system that is producing effort, not result… Wars on drugs … policies designed to stimulate investment… health care costs… job creation… You can probably name a dozen other areas in which energetic efforts consistently produce non-results.”

“Maybe the worst mistake of this kind has been the adoption of the [GDP] as the measure of national economic success… It measures effort rather than achievement, gross production and consumption rather than efficiency. New light bulbs that give the same light with one-eighth the electricity and that last ten times as long make the [GDP] go down… [GDP] is a measure of throughput—flows of stuff made and purchased in a year—rather than capital stocks.”

“In seeking the wrong goal, the system obediently follows the rule and produces its specified result—which is not necessarily what anyone actually wants. You have the problem of wrong goals when you find something stupid happened ‘because it’s the rule.’ You have the problem of rule beating when you find something stupid happening because it’s the way around the rule. Both of these system perversions can be going on at the same time with regard to the same rule.”

“Designing rules better means foreseeing as far as possible the effects of the rules on the subsystems, including any rule beating they might engage in, and structuring the rules to turn the self-organizing capabilities of the system in a positive direction.”

“The amount of land we set aside for conservation each year. The minimum wage. How much we spend on AIDS research or Stealth bombers. The service charge the bank extracts from your account. All of these are parameters, adjustments to faucets… but if they’re the same old faucets, plumbed into the same old system, turned according to the same old information and goals and rules, the system behavior isn’t going to change much.”

“The stabilizing power of buffers is why you keep money in the bank rather than living from the flow of change through your pocket. It’s why stores hold inventory instead of calling for new stock just as customers carry the old stock out the door… You can often stabilize a system by increasing the capacity of a buffer. But if a buffer is too big, the system gets inflexible. It reacts too slowly. And big buffers of some sorts, such as water reservoirs or inventories, cost a lot to build or maintain.”

“Delays in feedback loops are critical determinants of system behavior. They are common causes of oscillations… Delays that are too short cause overreaction, chasing your tail… But if there is a delay in your system that can be changed, changing it can have big effects. Watch out! Be sure you change it in the right direction!”

“Balancing feedback loops are ubiquitous in systems. Nature evolves them and humans invent them as controls to keep important stocks within safe bounds. A thermostat loop is the classic example… A complex system usually has numerous balancing feedback loops it can bring into play, so it can self-correct under different conditions and impacts. Some of those loops may be inactive much of the time—like the emergency cooling system in a nuclear power plant, or your ability to sweat or shiver to maintain your body temperature—but their presence is critical to the long-term welfare of the system.”

“Economies are extremely complex systems; they are full of balancing feedback loops with delays, and they are inherently oscillatory.”

“Growth has costs as well as benefits, and we typically don’t count the costs—among which are poverty and hunger, environmental destruction, and so on—the whole list of problems we are trying to solve with growth! What is needed is much slower growth, very different kinds of growth, and in some cases no growth or negative growth…. The world’s leaders are correctly fixated on economic growth as the answer to virtually all problems, but they’re pushing with all their might in the wrong direction.”

“Companies and governments are fatally attracted to the price leverage point, but too often determinedly push it in the wrong direction with subsidies, taxes, and other forms of confusion. These modifications weaken the feedback power of market signals.”

“Go for the good of the whole… Don’t maximize parts of the system or subsystems while ignoring the whole… Aim to enhance total systems properties, such as growth, stability, diversity, resilience, and sustainability—whether they are easily measured or not.”

“Self-organization is such a common property, particularly of living systems, that we take it for granted… And if we weren’t nearly blind to the property of self-organization, we would do better at encouraging, rather than destroying, the self-organizing capacities of the systems of which we are a part… Before you charge in to make things better, pay attention to the value of what’s already there.”

I highly recommend this book. Thinking in terms of the dynamics and interconnectedness of systems is the antidote to myopic management.

9 thoughts on “Thinking in Systems”