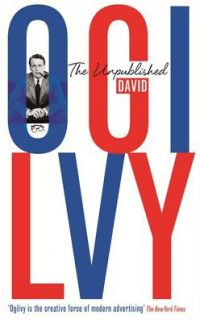 The Unpublished David Ogilvy: His secrets of management, creativity, and success—from private papers and public fulminations

This collection of David Ogilvy’s memos, letters, speech excerpts, and other documents was compiled by an Ogilvy & Mather executive to commemorate the founder’s 75th birthday. The writings span a 50-year period from 1935-1986. The cool thing about this book is that most of the contents were not written with the intent to be published, so it feels like a behind-the-scenes look at his management style as well as his thoughts on various subjects.

“You cannot bore people into buying your product; you can only interest them in buying it… Unless your advertising contains a Big Idea it will pass like a ship in the night… Neither soundness nor brilliance is any good by itself; each requires the other… promise, positioning—and brilliant ideas.”

“The greater the similarity between products, the less part reason plays in brand selection… We try to create sharply defined personalities for our brands. And stick to those personalities, year after year.”

“Nobody in advertising matters more than the copywriter and the art director.” On the importance of strong design: “What would you think if the space-buyer in your agency could buy 31 times as much circulation per dollar as other space-buyers… That is exactly the position you art directors are in.”

Ogilvy said “people who think well, write well.”  He recommended that all of his employees read Writing that Works by Roman and Raphaelson. He also urged his staff, “For Pete’s sake write shorter memos. He hated “pseudo-academic jargon… like attitudinal, paradigms, demassification, reconceptualization, symbiotic linkage and so on. Pretentious bullshit.”

From a speech given at Colby College, where he was a trustee: “I believe that one of the most useful things we can teach our students is to write lucid reports… and very few college graduates can… Knowledge is useless unless you know how to communicate it—in writing.”

“We should never take an account unless at least one key man can approach it with enthusiasm.”

Ogilvy met with the CEO of an unnamed client. “I said I’ve come to resign your business. He asked why. I said because your Executive Vice President is a shit… He’s treating your people atrociously and he’s treating my people atrociously. Now what he does to your people—that’s your business. But I’m not going to allow this man to go on demoralizing the people of Ogilvy & Mather.” He also resigned the Rolls Royce account. “The last 600 cars you sent to the United States don’t work. And I will no longer be a party to recommending that people buy them.”

Ogilvy was irritated by package goods manufacturers who spent more money on sales promotions than on advertising. “They are spending twice as much on price-cutting as on building brands… they are training consumers to buy on price instead of brand.” He concluded that “the men who employ them are more interested in next quarter’s earnings than in building their brands.” This relates to his repulsion for “the jackasses on Wall Street.”

“In promoting people to top jobs, we are influenced as much by their character as anything else.” Ogilvy preferred long-term employees over job hoppers. At the same time, he had no tolerance for nonperformers, and advised his managers on “separating the passengers without delay.” A recurring theme is a happy work environment. “When people aren’t having any fun, they seldom produce good work.”

“The best leaders are apt to be found among those executives who have a strong component of unorthodoxy in their characters. Instead of resisting innovation, they symbolize it—and companies seldom grow without innovation… But the American brand of democratic leadership doesn’t work so well in Europe… That is one reason why it is usually wise for American corporations to appoint natives to lead their foreign subsidiaries.”

Ogilvy observed that most corporate executives “are fine problem-solvers and decision-makers, but relatively few of them seem to be outstanding leaders. Some of them, far from inspiring their lieutenants, display a genius for castrating them… I do not believe that fear is a component in good leadership.”

“I was always scared sick—always a terrible worrywart when I was in my heyday at the agency… I should have been bursting with happiness and satisfaction with all that success. In fact, I was tortured with anxiety.”

David Ogilvy wrote Confessions of an Advertising Man in 1963 and Ogilvy on Advertising in 1983. He died in 1999 at his home in Touffou, France.

2 thoughts on “The Unpublished David Ogilvy”