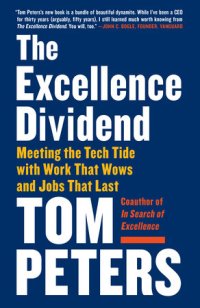 I have posted a review of The Excellence Dividend with some key points, but in this post I wanted to call attention to the vast number of books that Tom Peters refers to. The guy has read A LOT of books. I’ve compiled a list of 137 books mentioned throughout the text. I’ve read a few of them. The bold listings link to my review on The Key Point; the others link to Amazon.com.

Execution: The Discipline of Getting Things Done by Larry Bossidy and Ram Charan

Managers Not MBAs: A Hard Look at the Soft Practice of Managing and Management Development by Henry Mitzberg

Good Business: Leadership, Flow, and the Making of Meaning by Mihaly Csikszentmihalyi

Joy, Inc: How We Built a Workplace People Love by Richard Sheridan

Servant Leadership: A Journey into the Nature of Legitimate Power and Greatness by Robert Greenleaf

The Golden Passport: Harvard Business School, the Limits of Capitalism, and the Moral Failure of the MBA Elite by Duff McDonald

Enough: The Measures of Money, Business, and Life by Jack Bogle

The Score Takes Care of Itself by Bill Walsh

The Advantage: Why Organizational Health Trumps Everything Else in Business by Patrick Lencioni

Why Most Things Fail: Evolution, Extinction and Economics by Paul Ormerod

The Synergy Trap by Mark Sirower

Retail Superstars: Inside the 25 Best Independent Stores in America by George Whalin

Small Giants: Companies That Choose to Be Great Instead of Big by Bo Burlingham

The Three Rules: How Exceptional Companies Think by Michael Raynor and Mumtaz Ahmed

Race Against the Machine: How the Digital Revolution is Accelerating Innovation, Driving Productivity, and Irreversibly Transforming Employment and the Economy by Erik Brynjolfsson and Andrew McAfee

The Dream Manager by Matthew Kelly

Who: The A Method for Hiring by Geoff Smart and Randy Street

The Social Employee by Cheryl Burgess and Mark Burgess

Driving Honda: Inside the World’s Most Innovative Car Company by Jeffrey Rothfelder

Quiet: The Power of Introverts in a World That Can’t Stop Talking by Susan Cain

Under New Management: How Leading Organizations Are Upending Business as Usual by David Burkus

The War for Talent by Ed Michaels

The Decoded Company: Know Your Talent Better Than You Know Your Customers by Leerom Segal, Aaron Goldstein, Jay Goldman, and Rahaf Harfoush

Predictive Analytics: The Power to Predict Who Will Click, Buy, Lie, or Die by Eric Siegel

The Practice of Management by Peter Drucker

Nice Companies Finish First: Why Cutthroat Management is Over–and Collaboration is In by Peter Shankman with Karen Kelly

Uncontainable: How Passion, Commitment, and Conscious Capitalism Built a Business Where Everyone Thrives by Kip Tindell

Firms of Endearment: How World-Class Companies Pofit from Passion and Purpose by Raj Sisodia, Jag Sheth, and David Wolfe

The Good Jobs Strategy: How the Smartest Companies Invest in Employees to Lower Costs and Boost Profits by Zeynep Ton

Joy at Work: A Revolutionary Approach to Fun on the Job by Dennis Bakke

It’s Your Ship: Management Techniques from the Best Damn Ship in the Navy by D. Michael Abrashoff

Turn the Ship Around! How to Create Leadership at Every Level by L. David Marquet

Everybody Wins: The Story and Lessons Behind RE/MAX by Phil Harkins and Keither Hollihan

Delivering Happiness: A Path to Profits, Passion, and Purpose by Tony Hsieh

Fans Not Customers: How to Create Growth Companies in a No Growth World by Vernon Hill

Like a Virgin: Secrets They Won’t Teach You at Business School by Richard Branson

An Everyone Culture: Becoming a Deliberately Developmental Organization by Robert Kegan and Lisa Laskow Lahey

Automate This: How Algorithms Took Over Our Markets, Our Jobs, and the World by Christopher Steiner

The Glass Cage: How Our Computers Are Changing Us by Nicholas Carr

The Second Machine Age: Work, Progress, and Prosperity in a Time of Brilliant Technologies by Erik Brynjolfsson and Andrew McAfee

The Future of the Professions: How Technology Will Transform the World of Human Experts by Richard Susskind and Daniel Susskind

The Industries of the Future by Alec Ross

Rise of the Robots: Technology and the Threat of a Jobless Future by Martin Ford

Data-ism: The Revolution Transforming Decision Making, Consumer Behavior, and Almost Everything Else by Steve Lohr

Big Data: A Revolution That Will Transform How We Live, Work, and Think by Viktor Mayer-Schönberger and Kenneth Cukier

Glass Jaw: A Manifesto for Defending Fragile Reputations in an Age of Instant Scandal by Eric Dezenhall

Our Final Invention: Artificial Intelligence and the End of the Human Era by James Barrat

Three Billion Capitalists: The Great Shift of Wealth and Power to the East by Clyde Prestowitz

The Sovereign Individual: Mastering the Transition to the Information Age by James Davidson and William Rees-Mogg

Get What You Deserve by Jay Levinson and Seth Godin

The Difference: How the Power of Diversity Creates Better Groups, Firms, Schools, and Societies by Scott Page

Get BIG Things Done: The Power of Connectional Intelligence by Erica Dhawan and Saj-nicole Joni

The Power of Design: A Force for Transforming Everything by Richard Farson

Emotional Design: Why We Love (or Hate) Everyday Things by Donald Norman

Enchantment: The Art of Changing Hearts, Minds, and Actions by Guy Kawasaki

The Substance of Style: How the Rise of Aesthetic Value is Remaking Commerce, Culture, and Consciousness by Virginia Postrel

Lovemarks: The Future Beyond Brands by Kevin Roberts

The Business Romantic: Give Everything, Quantify Nothing, and Create Something Greater Than Yourself by Tim Leberecht

The Book of Tea by Kakuzo Okakura

The Art of Imperfection by Veronique Vienne

The Experience Economy: Work is Theatre and Every Business a Stage by Joe Pine and Jim Gilmore

Weology: How Everybody Wins When We Comes Before Me by Peter Aceto

Return on Influence: The Revolutionary Power of Klout, Social Scoring, and Influence Marketing by Mark Schaeffer

Youtility: Why Smart Marketing Is About Help, Not Hype by Jay Baer

Hacking Happiness: Why Your Personal Data Counts and How Tracking It Can Change the World by John Havens

What Stays in Vegas: The World of Personal Data—Lifeblood of Big Business—and the End of Privacy as We Know It by Adam Tanner

Dataclysm: Who We Are (When We Think No One’s Looking) by Christian Rudder

Age of Context: Mobile, Sensors, and the Future of Privacy by Robert Scoble and Shel Israel

The Internet of Us by Michael Patrick Lynch

Selling to Men, Selling to Women by Jeffrey Tobias Halter

Marketing to Women: How to Increase Your Share of the World’s Largest Market by Marti Barletta

The Power of the Purse: How Smart Businesses Are Adapting to the World’s Most Important Consumers–Women by Fara Warner

Why She Buys: The New Strategy by Reaching the World’s Most Powerful Consumers by Bridget Brennan

The Soccer Mom Myth: Today’s Female Consumer, Who She Really Is, Why She Really Buys by Michelle Miller and Holy Buchanan

Influence: How Women’s Soaring Economic Power Will Transform Our World for the Better by Maddy Dychtwald

Age Power: How the 21st Century Will Be Ruled by the New Old by Ken Dychtwald

50+: Igniting a Revolution to Reinvent America by Bill Novelli

Prime Time Women: How to Win the Hearts, Minds, and Business of Boomer Big Spenders by Marti Barletta

How Doctors Think by Jerome Groopman

Respect: An Exploration by Sara Lawrence-Lightfoot

The Virgin Way: How to Listen, Learn, and Lead by Richard Branson

First, Break All the Rules: What the World’s Greatest Mangers Do Differently by Gallup Press

Leadership the Hard Way: Why Leadership Can’t Be Taught–And How You Can Learn It Anyway by Dov Frohman and Robert Howard

Career Warfare: 10 Rules for Building a Successful Personal Brand on the Business Battlefield by David D’Alessandro

The Power of Small: Why Little Things Make All the Difference by Linda Kaplan Thaler and Robin Koval

The Power of Nice: How to Conquer the Business World with Kindess by Linda Kaplan Thaler and Robin Koval

Helping: How to Offer, Give, and Receive Help by Ed Schein

Humble Inquiry: The Gentle Art of Asking Instead of Telling by Ed Schein

Wait: The Art and Science of Delay by Frank Partnoy

Take the Lead: Motivate, Inspire, and Bring Out the Best in Yourself and Everyone Around You by Betsy Myers

The New Leaders: Transforming the Art of Leadership by Daniel Goleman

Mistakes Were Made (But Not by Me): Why We Justify Foolish Beliefs, Bad Decisions, and Hurtful Acts by Carol Travis and Elliot Aronson

Why We Make Mistakes: How We Look Without Seeing, Forget Things in Seconds, and Are All Pretty Sure We Are Way Above Average by Joseph Hallinan

Everything Is Obvious: How Common Sense Fails Us by Duncan Watts

The Drunkard’s Walk: How Randomness Rules Our Lives by Leonard Mlodinow

Fooled by Randomness: The Hidden Role of Chance in Life and in the Markets by Nassim Nicholas Taleb

Predictably Irrational: The Hidden Forces That Shape Our Decisions by Dan Ariely

How We Know What Isn’t So: The Fallibility of Human Reason in Everyday Life by Thomas Gilovich

Being Wrong: Adventures in the Margin fo Error by Kathryn Schulz

How She Does It: How Women Entrepreneurs Are Changing the Rules of Business Success by Margaret Heffernan

Selling Is a Woman’s Game: 15 Powerful Reasons Why Women Can Outsell Men by Nicki Joy and Susan Kane-Benson

Warren Buffet Invests Like a Girl: And Why You Should Too by LouAnn Lofton

What Got You Here Won’t Get You There: How Successful People Become Even More Successful by Marshall Goldsmith

What the hell… I’ll add two more which Peters endorsed on Twitter:

Humans are Underrated: What High Achievers Know That Brilliant Machines Never Will by Geoff Colvin

Nine Lies About Work: A Freethinking Leader’s Guide to the Real World by Marcus Buckingham and Ashley Godall.

Compassionomics: The Revolutionary Scientific Evidence that Caring Makes a Difference by Stephen Trzeciak and Anthony Mazzarelli

On page 419, he quotes Charlie Munger, vice chairman of Berkshire Hathaway: “In my whole life, I have known no wise people (over a broad subject matter area) who didn’t read all the time–none. ZERO.” He also quotes an unnamed co-founder of a large investment firm who mentioned in conversation, “If I had to pick one failing of CEOs, it’s that they don’t read enough.”

Maybe something from the above list will spark your interest. Or, read The Excellence Dividend to see how Peters synthesizes these inputs with nearly fifty years of experience studying organizational effectiveness.